When enough is not enough, but more is to much?


I feel like the process of painting in stages had brought out depth in perspective, at more than one point I feel I should have left more of the rock like formations, instead I covered it up trees.
Thanks to Bob Ross, I learned that there are no mistakes only Happy Accidents. Thanks Buddy! 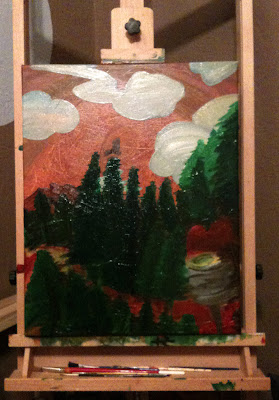 Closest to being finsihed
One think that I feel worked really well is the color of the background provides the rest of the space within the painting to appear vivid. That was a process early in the stages of painting, where i smeared lots of paint around, waited a day for the painting to dry and then scratched it with a #2 pencil. I like small amount of texture it brings to the whole painting.
I liked what evolved into clouds in this painting. That makes me laugh because of how many times I changed my idea for the concept of the painting. 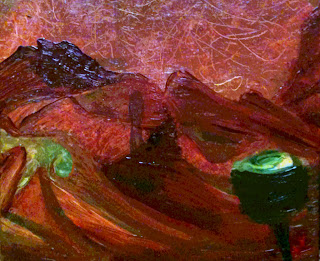 One area in need of improving is the blending of color. Some of the strongest points are where the least amount of time was spent trying to "figure" it out, as opposed to just "winging" it.  Some colors muted together well, more often when I had a "dirty" brush, so much for the "fine" art cateragory.
Well that is enough "air" quotes for one post. 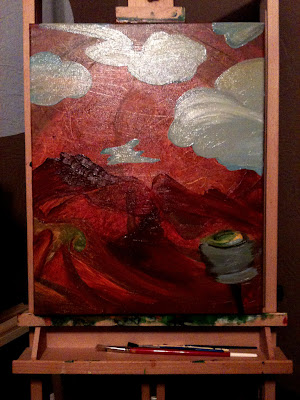 One last note, I gave this as a gift to a friend but I did not frame it. I envisioned a boxed frame with all flat black sides.Something to really stand out, so like a 2.5-3.5 inch look maybe?


The photos were all taken with my iPhone, which is not such a bad camera. 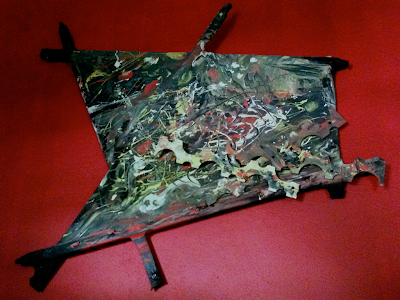 How many times have you heard "art" be described as a movement, or the expression of movement?

What does movement really mean?

How would you describe this painting to someone who has never seem it before?

Are some movements more meaningful than others?


I feel like I have made lots of meaningless movements in my daily motion to get ready to go to work for the day, but is that "living-art"?  Would you pay money to view of "body" of work with crusted toothpaste foam on the side of the sink?

What if it resembled an all-mighty religious figure?

One way to look at all of this is that is was about the "movement" to make something unique, and unlike anything else. The cast of characters, were my two good friends mark F. and justin H. We had really no intention of this being a "final" product, all we set out to make was a "canvas" that was a wacky shape, and what ever was painted on it match the same amount of wacky.

On a side note, if anyone who reads this wants to donate paint from old projects you might have lying around the house, I would be glad to recycle, because that is %100 of the materials used in this project, minus the staples. That took an extra trip to the store.

marterials used:
est. 10 feet of 1x2
scrap material from old shower curtain
200+ staples to secure fabric to frame
all paint (mostly all latex-acrylic) was found at my house from old projects along with all the brushes left lying around in various places, and in various conditions
wine bottle box spaces
random drywall screws
scrap wire for mounting
estimated time spent on project:
6 hours 34 minutes 14 seconds

I am happy with what came from that movement in time.  In my opinion, I feel like it could have another session of detail, perhaps smaller paintbrush work done to it, all the same color scheme. Although there are parts now that are very captivating,and give a good vast illusion of depth, I think the detail can only extend in what is already existing.

Lets be silly here, what would consider paying for something of this caliber?
or does this repulse you?