a glance at what trouble is brewing @ awsome inc.!!!!

That is right you read it right here here here!!! someone at awesome incorporated, a small creative productions company located in champaign illinois, with branches worldwide, is held under arrest while authorities figure out the extent of this scandalous crime. My un-named informant on the inside of the task force says that the breach included a hostile take over of large amounts of information, and we were able to obtain this one photo. A pretty decent one, considering the circumstances of what was at stake. This is as far as we know the first public peek of drawings for what might become the next brewery label for Darker Than Death Black Ale. 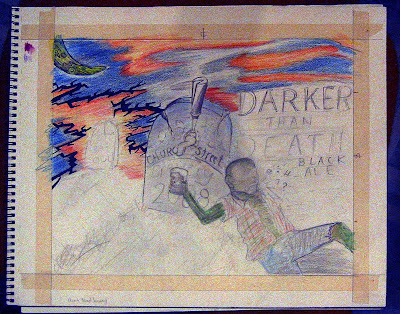 Which I am told is an on-going project for church street brewery, also located in champaign...hoping like hell to have a chance to brew worldwide...
okay.....
okay.......
enough of that faux news reporter crap. we all know my magic is made from behind the scenes action here is a drawing that i have been working with for the last few days...
was hoping to finish it and then print
who knows i might move on
to
something
entirely
different.